Welcome to the ‘Ghislaine Howard Collection’ at Elliot House, home of the Greater Manchester Chamber of Commerce.

The rooms on the first floor are open to visit as is the space on the second floor. If not in use, the four rooms on the ground floor may also be visited.

From 12.00-5.00pm on the last Friday of the month, all the spaces in the Chamber are open to visitors.

We hope that you enjoy your visit. For further information or for any enquiries regarding the work, please contact Ghislaine on: info@ghislainehoward.com

‘People call me the painter of dancing girls’, Degas told the Paris art dealer Ambroise Vollard, ‘It has never occurred to them that my chief interest in dancers lies in rendering movement and painting pretty clothes’. Like him, I am drawn to the theatre, and like him, it is not necessarily the final production that fascinates me, but the rehearsals when the actors and the characters that they are portraying are still in flux. This painting developed from rapid drawings made during rehearsals for a production of Brecht’s Threepenny Opera at the Contract Theatre in Manchester.

The Corridor and Seating Area 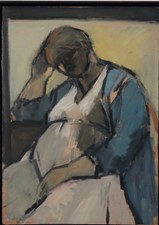 A painting that I will never part with. Michael was offered, and accepted, a post at the History of Art department at MMU. We made the difficult decision to leave the south of France where he had been teaching and return to our native North-West. I was still uncertain of my direction as an artist. However, one hot July day in 1984, I caught sight of myself in the studio mirror and realised that it was simply enough to paint myself - my own experiences. It sounds so obvious today, but back then images of pregnancy were unusual in contemporary media and in the art history books. It was a great pleasure for me that this painting was included in a recent exhibition at the Foundling Museum in London, ‘Portraying Pregnancy from Holbein to Social Media’. 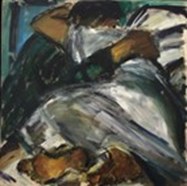 In 1992 I applied for and was offered a four month residency at Saint Mary’s Maternity Hospital - the very hospital where I had given birth to my son Max and my daughter Cordelia. The residency culminated in a one person exhibition at Manchester Art Gallery. This painting was developed from hundreds of drawings and studies that I made during my time at the hospital. 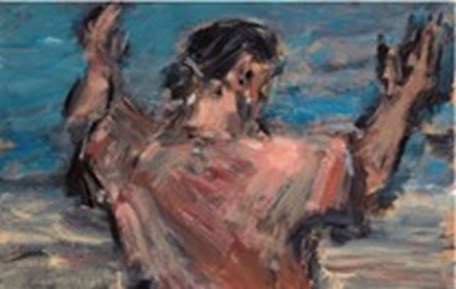 4. Woman by the Waves

A response to a beautiful poem

‘. . . She was the single artificer of the world

In which she sang. And when she sang, the sea,

Whatever self it had, became the self

That was her song, for she was the maker. Then we,

As we beheld her striding there alone,

Knew that there never was a world for her

Except the one she sang and, singing, made.’

An extract from ‘The Idea of Order at Key West’ by the American Wallace Stevens, 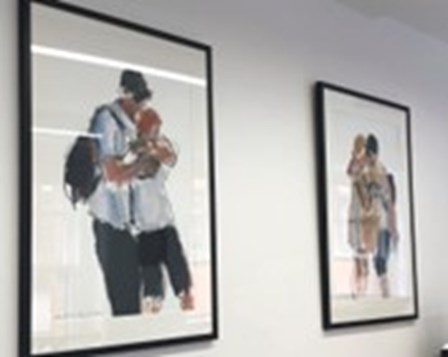 In the immediate aftermath of the Arena attack, a young man stood in Saint Ann’s Square, blindfolded, a rucksack on his back with a handwritten notice at his feet that carried these words: ‘I’m a young Muslim man and I trust you, do you trust me enough for a hug?’. . . .’ Inspired by this act and the response it drew from passers-by, I painted small panels of as many of the embraces that followed as I could. A selection of the paintings were exhibited at Saint Ann’s church and following that event I was asked if I would show some of my paintings here at the Chamber. After some discussion and a number of conversations, our present relationship with the Chamber has come into being and I am delighted that Chamber is now home to ‘The Ghislaine Howard Collection’. 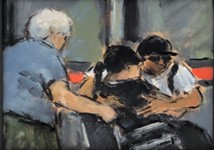 A selection of the Embracing Manchester panels

A selection of the small panels painted in response to the action of Bako, the young man who stood blindfolded in Saint Ann’s Square and whose action has been an inspiration to so many. Thirty-six of these panels may be seen in the Connect Room on first floor. 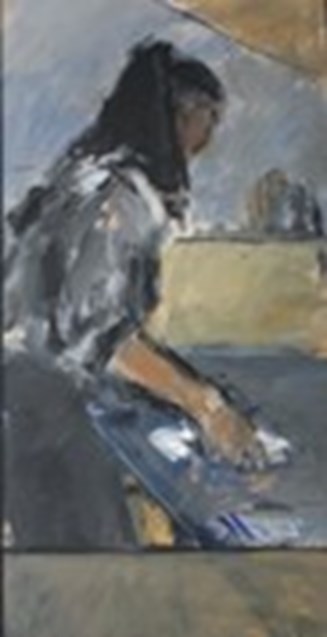 I am always fascinated by the unguarded moment. Again, like Degas, the practised movements of people absorbed in their professional activities have a grace and eloquence all of their own. 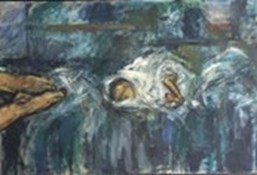 Although this was painted some weeks after Max was born, it captures those first moments of separation when a new child begins their own journey. 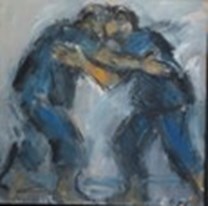 13. Study for Welcome the Stranger

Two figures meet and embrace. A small study for a larger painting within the Seven Acts sequence of paintings. In this painting I was looking to find a sense of movement - seeking that moment when the two separate figures would fuse into one expressive unit. 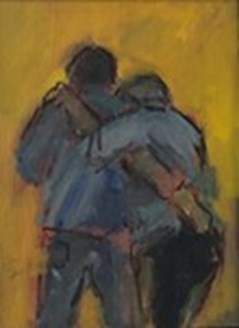 14. Study for Father and Son

A small study for a larger painting. But all the ingredients are in place, the challenge is to keep the energy and freshness in the finished piece. For me drawing and painting are one: As the painter Walter Sickert once said: ‘Any fool can paint, but drawing is the thing, drawing is the real test’. 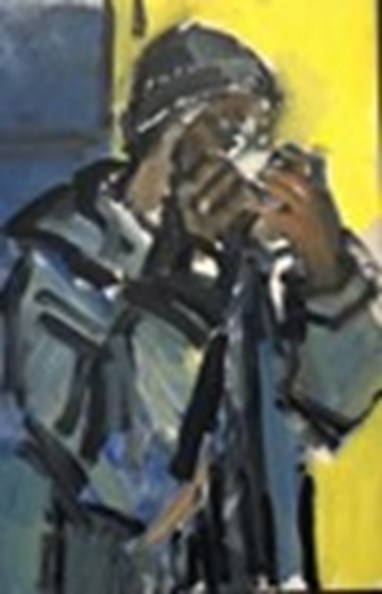 Another rehearsal study - this time from a company called ‘Acting on Impulse’. Their mission statement says it all: ‘Picture a group of people who are used to being looked down on and marginalised by society. They all come from different beliefs and different cultures, but they have one thing in common: they all know what it’s like to be homeless.

Now picture the same folk, smartly dressed, smiling and taking a bow in front of a big screen. The audience rises to their feet in a standing ovation, filled with a fresh understanding of the issues faced by the homeless. The actors leave the stage with new self-esteem, justifiably proud of what they have achieved together. That is our vision. Giving invisible people a profile and a voice.’ 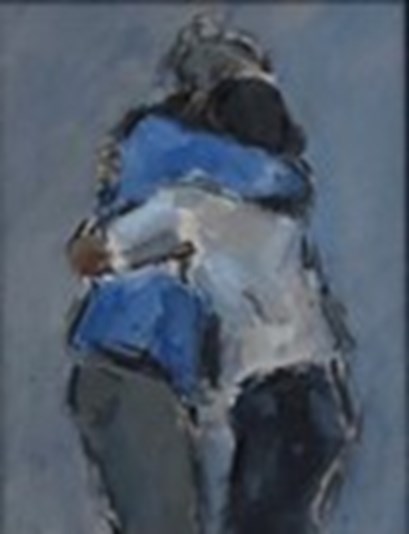 At the end of a shared holiday, two of our friends before going their separate ways. 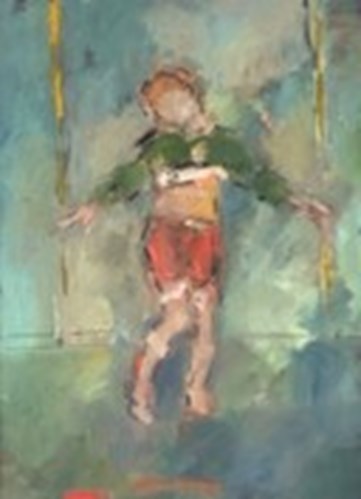 A study made of a young boy with cerebral palsy being assessed at Salford University’s Gait Measuring Laboratory. 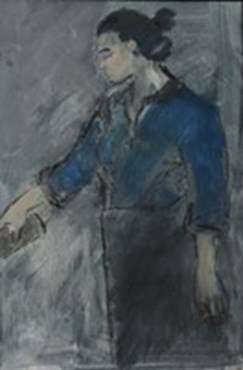 A painting made from a drawing of our daughter Cordelia at work. She was then a drama student in London and worked part-time in a posh London pub. It was a curious and rather wonderful experience for us to watch her expertise in dealing with a demanding and sometimes quite rude clientele.